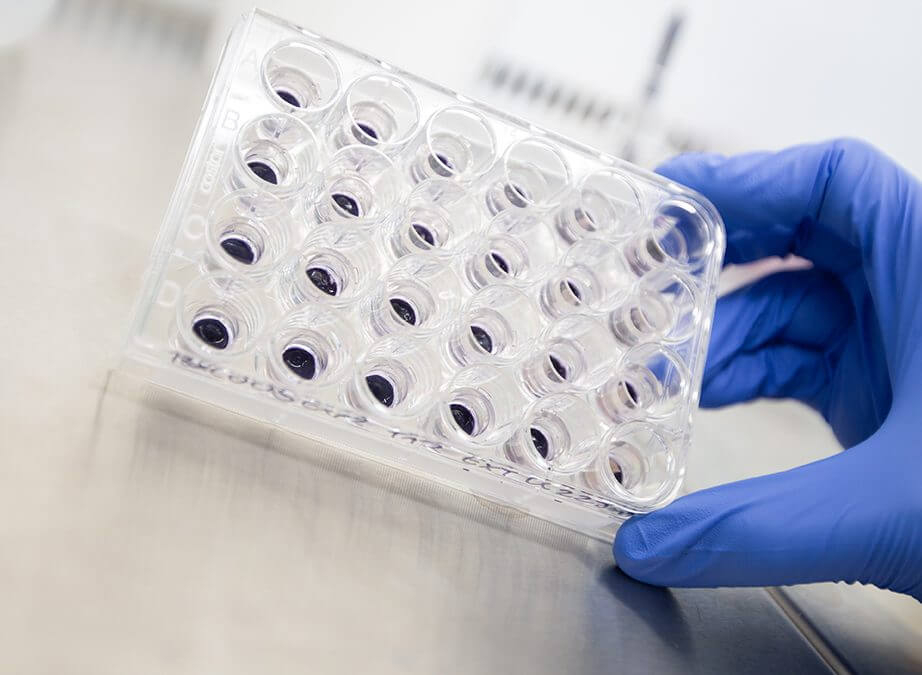 This article first appeared in HPC Today Magazine, September 2020 which can be viewed here.

Preservatives in cosmetics are well known skin sensitisers and a common cause of allergic contact dermatitis. Annex V of Cosmetics Regulation EC 1223/2009 lists 57 preservatives approved for use in cosmetic products in Europe, with maximum allowable concentrations, but much of the available safety information depends on historical animal data with limited human relevance.

Global industry efforts have resulted in the development of three OECD-approved in vitro tests for skin sensitisation, and new non-regulatory methods can be used to build a weight of evidence to demonstrate the safety of preservatives, including a prediction of potency. The tests provide a route for the re-evaluation of safe limits with increased relevance for humans, and assessment of proposed new preservatives for Annex V without the use of animals.

WHAT IS SKIN SENSITISATION?

Skin sensitisation is an allergic response following skin contact with a substance. It’s a complex cascade that was relatively poorly understood until recently, which held back progress in the development of in vitro tests. However, the Adverse Outcome Pathway (AOP) has now been described, consisting of a series of key events (Figure 1). 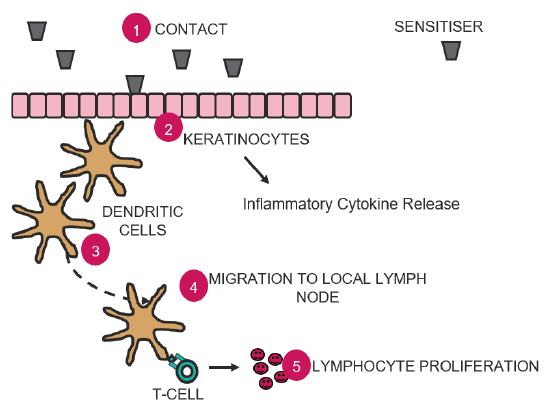 WHY SKIN SENSITISATION TESTING IS SO IMPORTANT

In a recent study of more than 12,000 people in Europe, 31.8% reported a skin reaction to a cosmetic product within the last year, with 37% actively avoiding skincare products known to cause a reaction (1). While many of these were thought to be irritation responses, a significant proportion may be attributed to allergy and up to 10% of dermatology patients who are patch tested in the UK are thought to have at least one allergy to cosmetic products or their ingredients (2).

As skin sensitisation is a permanent condition involving our immune response, it is much more serious than irritation and forms an essential part of cosmetic safety assessment. Following the first exposure to a contact allergen and the initial response (known as the induction phase), subsequent exposures spark an immune reaction (elicitation phase) resulting in contact allergy.

Preservatives are well known skin sensitisers and, alongside fragrances, are one of the most common categories of cosmetic ingredients to cause allergic and photoallergic contact dermatitis. As a result, preservatives are tightly regulated in Europe. Annex V of Cosmetics Regulation EC1223/2009 lists 57 approved preservatives with their maximum allowable concentrations to be used in finished products. The Annex was last updated on 23rd January 2020.

Regardless of tight regulation, allergic reactions to preservatives persist. In many cases, historical animal data has failed to protect the population from skin sensitisation reactions to preservatives in cosmetics. For example, restrictions on MI (methylisothiazolinone) have been shown to be “not very effective” in lowering skin sensitisation risk, reducing incidence by only a small amount from 0.7% to 0.5% (3).

Some of the safety profile issues may date back to historical approaches to testing, especially for preservatives that have been on the market for a long time. Early animal methods became the benchmark without validation. While there has been a complete ban on animal testing for cosmetics and their ingredients in Europe since 11th March 2013, there is still widespread use of historical animal data on Safety Data Sheets.

Many companies are depending on this approach rather than conducting new testing with modern animal-free methods, so there’s an absence of human-relevant scientific data.

There are ethical issues associated with in vivo human patch tests, given the potential for volunteers to be left with a serious allergy lasting a lifetime. However, many cosmetic companies still see this approach as the “gold standard” for newly developed ingredients and request Human Repeat Insult Patch Test (HRIPT) data from raw material suppliers.

The need for updated scientific approaches to skin sensitisation testing is clear, for the ethical benefit of both animals and humans.

With the arrival of advanced in vitro tests, industry now has an opportunity to revisit the safety assessment of preservatives in cosmetics, with the possibility to reframe safety profiles in a more human-relevant context and to reduce the incidence of contact allergy in the European and global population.

Thanks to a truly global effort, in vitro methods are now available to address the first three key events in the skin sensitisation AOP:

HOW ARE THE REGULATORY TESTS USED?

In the EU, the REACH regulation stipulates that in vitro methods must be used as the default strategy to skin sensitisation testing in the first instance. Current guidance favours the “2 out of 3” approach to OECD TGs 442c, d and e, rather than relying on a single method in a stand-alone context. Substances are classified based on returning a Non-Sensitiser or Sensitiser result in at least two out of the three tests (Figure 2). 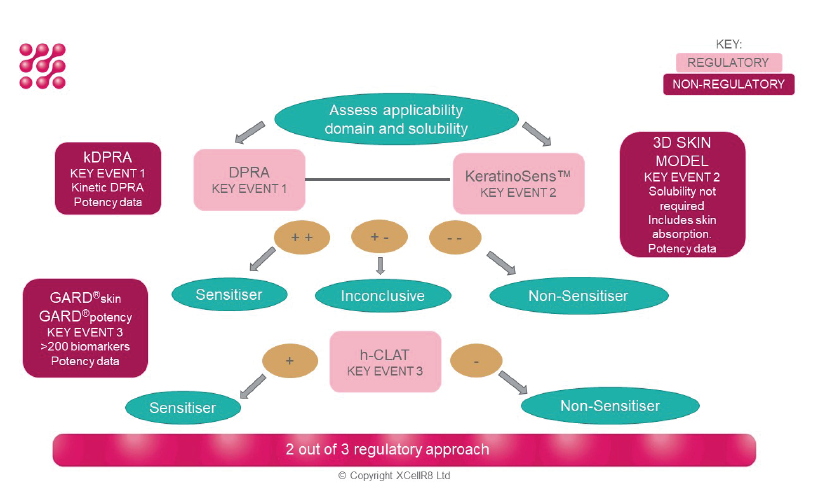 Figure 2. Decision tree for the “2 out of 3” approach to regulatory skin sensitisation testing. Non-regulatory methods can provide additional supporting data in a weight of evidence approach and include potency prediction. ©XCellR8 Ltd

The rationale is that skin sensitisation is a complex physiological pathway, so when replacing an animal test, it’s important to ensure that multiple key events are modelled in vitro, rather than depending on a single endpoint. The preferred approach is to conduct all three tests and this has a distinct advantage over animal methods: the generation of detailed mechanistic data in each step in the human skin sensitisation pathway.

This brings a more comprehensive understanding of the effects of the substance, compared with the “black box” approach of administering it to an animal and observing the outcome. However, conducting a full package of in vitro tests can be more costly and many companies opt to carry out two tests initially (usually DPRA and KeratinoSens™ or LuSens), only proceeding to a third (h-CLAT) if required for confirmation of classification.

The current OECD-approved range of in vitro skin sensitisation tests have some drawbacks relevant to the safety assessment of preservatives. One is their limited potential to predict potency. None have been formally validated for this purpose, but some have scope to provide supporting data, including the DPRA (which assigns Low, Moderate or High reactivity classes to Sensitisers) and KeratinoSens™ (where the maximum induction level “Imax” can support prediction of likely sensitising potential relative to similar chemicals). Another challenge is that some substances are not compatible with in vitro methods due to poor solubility.

Thanks to ongoing efforts by industry, there have been some exciting developments recently. New non-regulatory methods can be used to provide supporting data in a weight of evidence approach (Figure 2), including in vitro tests to assess potency. The new kinetic DPRA (known as kDPRA) measures the rate of interaction between the chemical and the protein over a range of concentrations and times and has successfully completed an international validation trial, providing a potency dimension to Key Event 1 tests (4). An add-on to GARD®skin is also available using 50 biomarkers to enable a GARD®potency assessment for Key Event 3 (5).

Reconstructed skin models can be used to provide supporting skin sensitisation data for a weight of evidence approach, and as the substance is applied directly to the skin surface, such tests can be very useful for substances with limited solubility. A non-regulatory method is available and in use by some cosmetic companies. It measures interleukin-18 production by keratinocytes as an alternative assessment of key event 2 which also incorporates potency (6).

With the global shift towards all things vegan, ethical and cruelty-free, it’s important to consider the credentials of in vitro tests used for safety assessment of preservatives and other cosmetic ingredients. Most in vitro tests utilise animal-derived components such as serum, tissue extracts and antibodies, and cannot be described as truly animal-free. Recent adaptations of the KeratinoSens™ and h-CLAT methods have achieved animal product free conditions (7,8) and it’s important that these considerations are included in any new method development for 21st Century testing requirements (9).

Current limitations of the approved in vitro methods often result in authorities requesting additional data using animal tests. The Local Lymph Node Assay (LLNA) using mice (OECD TG 429) is commonly performed for this purpose to distinguish between GHS category 1A and 1B sensitisers. A recent article in Chemical Watch estimated that the European Chemicals Agency (ECHA) may require additional animal tests for skin sensitisation for over 50% of REACH substances, despite in vitro methods being the default expectation.

There’s a perception – and a hope – that cosmetics are exempt from such animal testing. However, a recent ruling by ECHA’s Board of Appeal clearly stated that animal testing would be required for some cosmetic ingredients – the latest chapter in the ongoing controversial mismatch between REACH and the EU Cosmetics Regulation (10). In the context of skin sensitisation for preservatives for cosmetic use, it’s imperative that strategies to fully replace animal testing are urgently adopted. Two options under discussion are:

Greater uptake of new tests by industry is needed as part of an updated due diligence approach to ingredient safety, ensuring only the safest products are on the market, rather than depending on the bare minimum of historical safety data from outdated animal tests. Given the safety concerns around the HRIPT, in vitro tests have a place as a pre-screen to human volunteer studies in addition to replacing animal tests for skin sensitisation.

Taken together, these in vitro strategies present a valuable opportunity to re-assess safe use limits of preservatives listed in Annex V of the EU Cosmetics Regulation.

They also provide a suitable route to assess new preservative candidates for inclusion in Annex V without the need for animal testing.