WHY CONDUCT A GENOTOXICITY TEST?

BlueScreen™ Animal-Free (BS-AF) is a non-regulatory human cell-based test, free from any animal-derived components. Unlike the current in vitro regulatory methods for genotoxicity, BlueScreen™ Animal-Free detects all three major classes of genotoxin (mutagens, clastogens and aneugens) in a single test. The test is therefore ideal as a rapid, cost-effective early screen in product development and to generate supporting information in a weight-of-evidence approach to safety assessment.

Genotoxicity can be defined as the ability of a test item to cause damage to the genetic material of cells, which may potentially lead to cancer. A genotoxic test item may be a mutagen (changing the DNA code), a clastogen (damaging or breaking the chromosomes) or an aneugen (changing the number of chromosomes). The term genotoxicity is often confused with mutagenicity, but as described above, mutagens are only one class of genotoxin. In order to gain insight into the potential of a test item to cause cancer, it is important to test for all three major mechanisms of genotoxicity.

The test described here is a non-regulatory method for the assessment of the genotoxic potential of test items. It provides classification as Genotoxic or Non-Genotoxic and captures all three types of genotoxin, detecting mutagens, clastogens and aneugens. The test does not identify which of the mechanisms is responsible for the specific genotoxic potential of the test item.

The human cells used in the BlueScreen™ test are derived from the TK6 human white blood cell line. The method detects changes in a stress pathway involving the GADD45a gene that is activated in human cells in the presence of genotoxins. The TK6 cells contain a specially inserted marker (luciferase) that converts an added substrate to emit light when the stress pathway becomes activated – this light signal is quantified using a luminometer and compared with controls to predict genotoxic potential. The test is performed both with and without human liver extract (S9) so that any genotoxic potential due to metabolism can also be predicted. Simultaneous assessment of cytotoxicity ensures that the results for genotoxicity are not adversely affected by basic toxicity to the human cell cultures.

The standard BlueScreen™ test included the use of animal-derived components in the test system, such as horse serum in the cell culture medium and rat liver extract (S9). In order to provide our clients with a truly animal-free test, XCellR8 has adapted the cell culture to animal product-free conditions, in collaboration with the developer and manufacturer of BlueScreen™, Gentronix Ltd. Horse serum has been replaced with human serum and rat S9 with human S9. Proficiency Testing demonstrated successful classification of a panel of genotoxic and non-genotoxic reference chemicals, with and without S9. 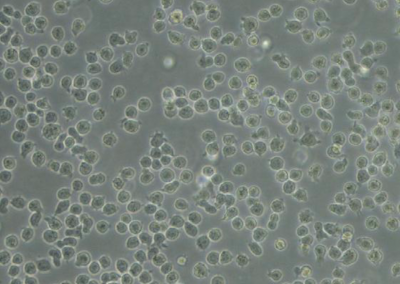 The BlueScreen™ cell line, known as GLuc-T01 24e1, is derived from the TK6 human white blood cell line. The cells are p53 competent and host a patented Gaussia luciferase (GLuc) reporter system which exploits the normal regulation of the GADD45a gene. Exposure to a genotoxic test item increases the expression of GADD45a (as part of a stress response) and hence Gaussia luciferase synthesis in the cells is also induced. The addition of a light producing luciferase substrate allows the signal to be quantified by luminescence detection.

SUMMARY OF THE TEST METHOD

Get in touch today to ask for pricing information.

Keep this information for your files