WHY CONDUCT A MICRONUCLEUS TEST?

The in vitro Mammalian Micronucleus Test investigates the potential of a substance to cause genotoxicity through chromosome damage, by analysing micronuclei formed in cells. Genotoxicity refers to the ability of substances to induce genetic alterations through damage to the genetic material within cells. Such damage can lead to carcinogenicity, making testing for genotoxicity an important step in many safety assessments for chemicals. Genotoxic substances can cause chromosomes or chromosome fragments to not be taken into daughter nuclei during cell division, forming a micronucleus. The test detects the effects of both aneugens (which change the number of chromosomes) and clastogens (which damage or break chromosomes).

​The in vitro Mammalian Micronucleus Test (MNvit) described here is a method to determine whether a substance is genotoxic. This is achieved through determining the number of micronuclei found in cells exposed to the test item. Micronuclei found in the cell cytoplasm are counted during the interphase of the cell cycle. This represents damage that has been passed on to daughter cells after cell division, meaning both aneugens (substances causing an abnormal number of chromosomes) and clastogens (substances which break or disrupt chromosomes) can be detected by the method.

Human TK6 cells are harvested in the exponential growth phase and incubated with the test item as several different concentrations for both short-term and long-term treatments (1.5 – 2 cell cycle lengths total). As the cells are not metabolically active, this is added to the test system using human S9 liver extract. Cell proliferation is measured to ensure the cells have divided during or following exposure to the test substance, and cytotoxicity to ensure sufficient viable cells are analysed.

The cells are lysed and stained with nucleic acid dyes before the micronuclei are counted via flow cytometry from a minimum of 2,000 cells per culture. A test item is determined as testing positive for the test and capable of causing chromosome loss/breaks if any of the following criteria are fulfilled: a statistically significant increase in the number of micronuclei are found in any of the experimental conditions compared to the controls; the increase in micronuclei is shown to be dose-related when analysed with a trend test; or the results are outside the distribution of historic negative controls. 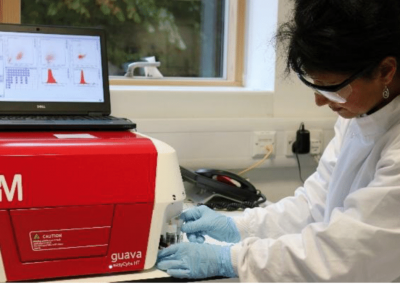 TK6 cells are a suspension cell line of human lymphoblasts and are commonly used as the test system for micronucleus assays. The cells are maintained in the exponential growth phase in routine culture at 37°C / 5% CO2, while the culture medium and all culture reagents are free of animal-derived components.

SUMMARY OF THE TEST METHOD

Get in touch today to ask for pricing information.

Keep this information for your files